Bicycle is becoming more and more important for saving the Earth environment, and many people started it for their health.
For 15 years I like bicycle and ride it, especially Road bike, which is fast and enables me to ride long distance.

However recently I bought a Folding Bike. and I love it more than I expected.

In this article, I'll write what has happened since I bought the folding bike.

This is the bike I bought. 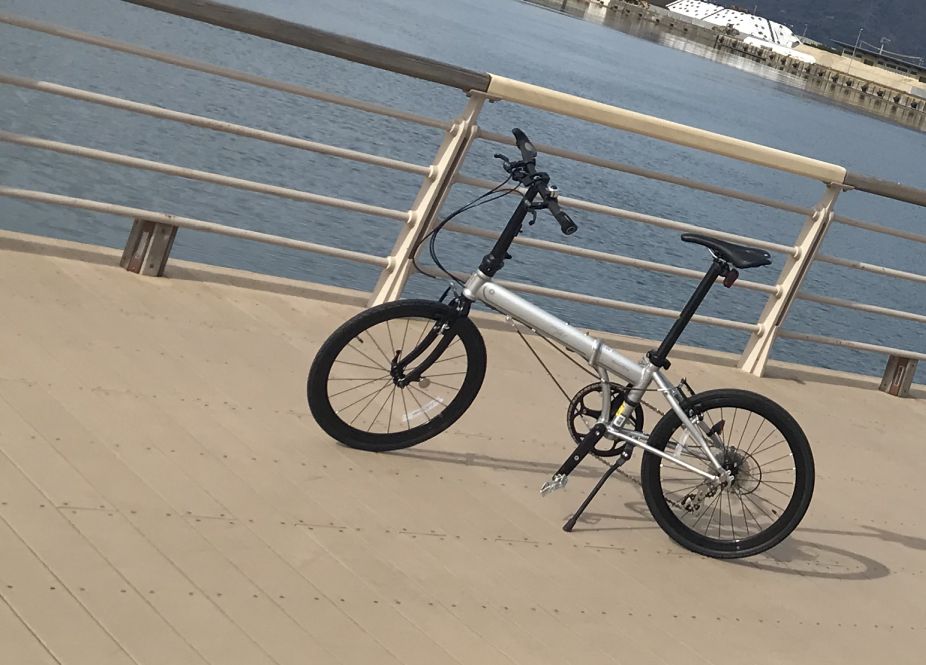 DAHON Speed Falco 2020 (I'm not sure the same type of bike is sold in other countries.)

This has been selling well in Japan. Many shops recommend this, for its speed, stability and versatility.

The most attractive feature of this bike is its Wheel Size. Larger than other bikes. Not only in DAHON, but also in major folding bikes.
The larger the bike has, the greater speed and the more stability it has.

The reason I choose

DAHON is the largest folding bike maker in the world and of course very popular in Japan. This means you can buy DAHON's bike in many shops.
This is very important if you live in rural area! Bikes of some famous companies - such as Brompton or Tern - aren't sold in any shops in my prefecture!

Therefore I choose DAHON. The nearest shop sell it. However I needn't be disappointed. DAHON sells many types of bikes as follows:

Every bike seems to be attractive for me.

There are some categories in folding bikes. It is separated by WHEEL-SIZE.

But there was a big problem... I couldn't ride these bikes before I choose one, even I couldn't see them!, so I worried whether folding bikes run well or not, riding these bikes is fun or not.

If the bike is slower than my mama-chari (the name of daily used bicycle in Japan), I will stop riding it even it is expensive.
The price of each bike is over ¥60,000. I won't take risk. This led me to a safe choice.

This is why I choose 'Speed falco', which is the fastest in DAHON's line up.

When I rode my friends' folding bike (much cheaper than DAHON), I felt riding it was very boring. Heavy, Slow and Less-Stability. So I didn't expect Speed-faclo gives me such speed!

I can ride as fast as a hybrid-bike!(In Japan, hybrid-bike is called cross-bike.) I was very surprised and much more fan than I expected!

Of course, this can run as much speed as road bike. I can keep about 30 km/h with road bike, and with Speed-falco I can keep only 23km/h. But it is enough for me. It is much faster than mama-chari.

At first I felt a little less stability than normal-bikes, but I got used to it soon.

Since I bought this I've been using this for many purpose, such as shopping, go to cafe and exercise.

Folding is also as much important factor as riding-feel. In this factor, Speed-falco is not as good as others.

Folding process is very easy. You can fold this within a minute.
But after folding, this is quite large. It is difficult to put this in entrance of your apartment. You need some room for this. (I don't recommend you put this in your apartment's bike garage! The bike will soon get rusty and you have a stolen-risk!)

Even though it is large, Foldable is significant factor when you live in a apartment.

Foldable makes it easier to carry this up to second or third floor with using steps or a elevator in your apartment. With road bike, carrying up is very hard. This isn't caused by its weight but caused by its size.

Foldable also gives you a chance to ride bicycle in other places with a car or a train.

You can put the bike into your car easier than road-bike.

When I put my road bike into my car, I need to take following steps:

No rear sheet folding. No wheels detachment. Much easier.

I like driving too. And sometimes when I drive to some place, I take this bike and ride it about an hour. especially near the toursism-area. Of course these places have a heavy traffic jam! So I seldom go to these places. But after buying this bike, I go with this. It gives me new experiences.

But going with this bike by train isn't so easy, because the bike is heavier than my road bike and hard to walk with it for long distance.
The folded size is not small, especially in depth dimension. The depth is about as twice as road bikes. This makes the bike hard to be carried.

If you want to do Rinko (輪行: Japanese word that means travelling with bike by public transport), I suggest to buy smaller one.

This means smaller bikes is more suitable for metropolitan-people (I suppose those people don't have car).

But this doesn't make me disappointed, because there isn't much public-transport in the area I live. We usually move by car.

This folding bike gives me a lot of fan.

It has enough speed. I didn't think folding bikes had such speed.
And it is very convenient for daily use. You can use it as mama-chari, but more fashionable.

Also it's good with cars and daily use, but hard to Rinko for its size.

If there will be times when you buy a folding bike, please be careful about what you want to use it for.

But please don't so worry. Any size you bought, it gives you happiness!